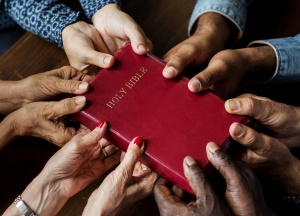 My mother believed in the power of prayer, and thought I should do more of it. I can’t say she was wrong. She prayed for self-improvement (for God to take away her bitterness at someone) and for social issues (returning prayer to schools). I don’t know whether she ever prayed for an end to my bipolar disorder (she kept most of her praying private between her and God), but I never have. I don’t think it works that way.

You could pray that science finds better treatments for bipolar disorder.

You could pray that you find a support system that helps you (or give thanks for the one you already have).

You could pray that you find a therapist, or a therapy, or a psychiatrist, or a medication that helps you. (Though I would recommend putting some effort into this one yourself as well as praying.)

You could pray that you have the strength to get out of bed in the morning or to sleep at night.

You could pray for understanding of what you’re going through – by another person, by an employer, by the world at large, or even by yourself.

You could pray that you not do too much harm while in the grip of mania or depression.

You could pray that you have the courage to reach out to someone else, and the wisdom to keep reaching.

In my opinion, what you can’t do is “pray away” the bipolar disorder. If you’ve got it, you have to find a way to live with it. If prayer helps you do that, more power to you. But, again in my opinion, prayer is not a cure for the disorder. There are some things that are meant for religion or philosophy to make better, and things that science has a better shot at.

You can point to various miraculous remissions of cancer or other diseases, or make the argument that removing demonic possession would now be called healing of mental illness. And if those give you comfort or hope, again, good for you.

St. Dymphna is the patron saint of the mentally afflicted (though personally, I think she should be the patron saint of abused children). If she, or God, or some other higher power of whatever religion or denomination or sect can lessen your suffering, go for it.

I just don’t believe that you – or I – personally will be cured of bipolar disorder by prayer.

Feel free to disagree with me.

Chillin’ at the Waffle Ho