I suppose I was a bipolar child. I don’t really know, but I assume I was, because now I’m a bipolar adult.

I think I was more of a depressed child, which actually makes sense, since I have bipolar 2, with depressive episodes far outnumbering hypomanic ones. There were some times, though, when I would laugh loudly and inappropriately in class, triggered by a word that reminded me of something funny I’d read. There were times I’d walk around with a village-idiot grin because of some minor accomplishment like winning a live goldfish at a school fair. 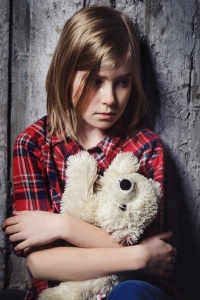 I’m fairly sure my depression wasn’t reactive, mostly, although parts of it surely were. The bullying, betrayals by friends, not understanding social conventions – all these were things that could easily make a person depressed, regardless of brain biochemistry.

But by and large my life was what would be considered pretty damned idyllic. I had stable, loving parents, a comfortable home in the suburbs with good schools, all the food I wanted, and as many toys as I could play with. I had a sister and a neighborhood full of children my age, but I remember being perpetually lonely. I had a good education, but looking back I realize that my illness prevented me from getting the most from it. There was no sexual or physical abuse or neglect. No one close to me died or suffered major trauma, at least until I was in high school and my parents suffered illnesses. Even then, they did a good job of keeping life as normal as possible. At the time we never felt it was a tragedy. It was just something we got through together.

That just leaves endogenous depression. Or at least the depression half of bipolar disorder. I remember one day walking home from elementary school and thinking, “All these houses look so pretty, but the people in them aren’t all happy.” It was somewhat of a revelation to me.  I had several major meltdowns, which I’ve written about before, and hundreds of smaller depressive episodes (http://wp.me/p4e9Hv-6J). I had nervous twitches and tics, and was prescribed Valium for them.

During my high school years, it was suggested that perhaps I ought to go to the school district’s psychologist. (This was probably during the episodes of inappropriate laughter in class.) My parents, who were not really familiar with mental illness and psychiatry, asked me if I wanted to go. I didn’t. I probably should have, although back then – the seventies – it’s fairly unlikely that I would have been diagnosed with bipolar disorder, of any type. I might have gotten some help for the depression, though. They might have taken me off the Valium.

Like most lonely and misunderstood kids, and perhaps most depressive children, I found my salvation in books. They were friends, distractions, instruction manuals on how to survive, food for my emptiness, a place to lose myself when the world was too much with me. By and large it worked, at least as well as anything could – a self-prescribed and self-regulated form of instinctual bibliotherapy.

These were not books on how to make friends, or ones that promised to teach a child how to cope with emotions. They were for the most part pure escapism. Fantasy and science fiction, mysteries and adventures, literature and bestsellers – a complete mishmash of classics and trash. Those were my doctors, my therapists, my Prozac, my mood stabilizers.

I look back now on myself as a child – mentally disordered, undiagnosed, untreated – and wonder how I survived  as much as I did.

If I were a child these days, would I get the help that I needed then? Would my parents recognize that I was not just odd and unhappy, but mentally ill? Would I have been diagnosed properly? Medicated properly? Counseled properly?

With all that needs to go right and all that can go wrong during the process, it feels like getting help for a bipolar child certainly was – and perhaps still is –pretty much of a crapshoot. I made it through, but I hope it’s easier for a kid like me these days.

The Week of Living Alone

What Bipolar Disorder Has Cost Me