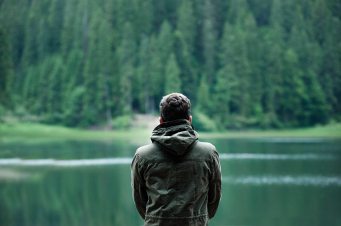 My husband is no stranger to situational depression. He experienced it when his father died, when a beloved pet passed unexpectedly, and when his job turned suddenly more stressful and meaningless.

But he didn’t understand clinical, chronic depression. “What would it be like if those feelings lasted for months at a time, or even years?” I asked. He said he couldn’t even picture it. “That’s the way my life is,” I explained. Then he lost his job, and after a brief period of relief from the stress, he finally experienced depression that lasted more than two weeks – two years, in fact, during which he was unable to work.

He did not seek help for it until his best friend and I both proactively encouraged (i.e., nagged) him to do something about it. He’s been on an SSRI ever since and has occasionally seen a psychologist.

Lately, there has been a movement to educate men about mental illness and mental health. Primary among its goals is to help men understand that mental illness is a thing that can affect them and that there is no shame in asking for help.

Certainly, the statistics bear out that the majority of mental health consumers are women. Psychology Today reports: “Research suggests that women are about 40% more likely than men to develop depression. They’re twice as likely to develop PTSD, with about 10% of women developing the condition after a traumatic event, compared to just 4% of men. It’s easy to write off this epidemic of mental illness among women as the result of hormonal issues and genetic gender differences, or even to argue that women are simply more ’emotional’ than men. The truth, though, is that psychiatrists aren’t really sure why mental illness is more common among women.” Perhaps the answer is that seeking treatment for mental illness is more common in women.

Prevention magazine says that there are four mental health conditions that affect women more than men: depression, anxiety, PTSD, and eating disorders. That PTSD is twice as common in women may surprise you, though the stats about eating disorders are not likely to. The fact is that, although few women experience the traumas that soldiers do, they are much more likely to experience other sorts of trauma, such as rape, which can also lead to PTSD.

But men experience societal and psychological barriers to getting help when they need it. Among the excuses you hear are these:

Or, looked at another way, the campaigns against stigma around mental illness have been less than effective for most men. Now the attention to that problem, which is surely needed, is beginning to be heard and, one hopes, acted upon.

Still, it’s important to remember that mental illness is not just a men’s problem or a women’s problem. It is a human problem, affecting both genders (and all ages and races) if not equally, then without discriminating.

It is important to get men the mental and emotional help they need, in a timelier and more comprehensive fashion.  I would have liked to see my husband be willing to recognize when he needed to get help and to get it without being pushed. But it would be wrong to push the needs of women aside to accomplish this. This is a societal problem, and while right now spreading the word to men is particularly important, our goal should be to make sure that all people are aware of the prevalence of mental illness, the fact that it can happen to them, and that there are places to get help. That message, at least, is not gender-specific.

The Perils of Working Full-Time Again