Well, some of them are. Given that one in four of Americans experiences a mental or emotional disorder at some time during their lives, 25% of any given group either are, have been, or will be affected by mental problems. Politicians. Girl Scout leaders. Chefs. Whoever. 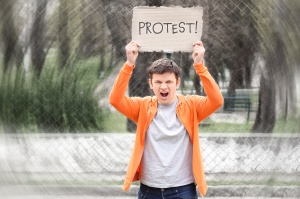 Of late, though, it seems that political extremists – and politicians, of course – are being singled out for accusations of mental illness. And as for terrorists, they are in common understanding all mentally ill, so anyone you label as a terrorist is automatically insane. But we’re far from agreeing who is and is not a terrorist. (Antifa? Greenpeace? The NRA? The DAR?)

Admittedly, some of the extremists’ actions and statements seem “crazy,” but let’s stick to the more technically correct “mentally ill.”

Except it isn’t technically correct in most cases.

A lot of people seem paranoid these days. Everyone on the “other” side is out to get them, destroy America, or at least scare the pants off us. Conspiracy theories abound. And nearly all of them are crazy. (I wrote about this a short while ago: http://wp.me/p4e9wS-AH).

But “paranoid” is a clinical term in psychology, and it has a specific meaning: Paranoid Personality Disorder is a psychiatric condition, manifested by, among other things, “generally unfounded beliefs, as well as … habits of blame and distrust, [which] might interfere with their ability to form close relationships,” as WebMD says.

Those traits your political or social opponents may have, but most of them don’t also:

Diagnosis at a distance is dangerous, as well as bogus. The fact is that none of us (except perhaps psychiatrists) can diagnose a person as paranoid or any other variety of mentally ill without having met the person and performing detailed interviews and tests (I’ve written about this too: http://wp.me/p4e9Hv-6F).

This is also true of public figures. We can say that Donald Trump, to choose an example not entirely at random, has narcissistic traits; or is a narcissist in the garden-variety, non-technical meaning of the word; but we cannot say that he has Narcissistic Personality Disorder, an actual clinical diagnosis. We may think he’s crazy, but we can’t say whether he’s mentally ill.

Labeling is a convenient way to dismiss a person who disagrees with you without listening to what he or she has to say, or considering the possible validity of an argument or even a statement of fact. If we apply a label, we make an assumption about a person that may or may not be true.

Stigma comes with the label mentally ill. People with diagnosed mental disorders are too often assumed to be violent, out-of-control, homicidal (or suicidal) maniacs – and therefore not worth listening to. In fact, many people with mental illnesses have no impairment in their cognitive function. It profoundly devalues them to dismiss them from political and social topics of conversation.

So, bottom line. “Those” people may be crazies, may act crazy, talk crazy, believe crazy things, but it is not accurate or helpful to call them crazies. Neither is it helpful to label someone who has never been diagnosed or has never been open about a diagnosis as mentally ill.

I just think that how we talk about people affects how we treat them. And that matters.

The Fragility of Hypomania: A Reminder

A Window, Biscuits, a Butter Churn, and a Mule