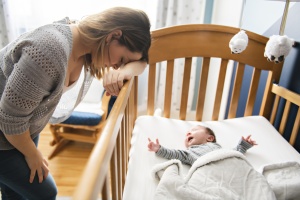 Having bipolar disorder was one of the reasons I decided not to have children. Really, it was having major depression, which was what I was diagnosed with at the time.

I wasn’t so much concerned with passing my condition on to any potential offspring, since, at the time when I was contemplating motherhood, the genetic links were not yet that firmly established. Now that I know more about it, I think that might have been another deterrent. My parents had no idea what to do with me when bipolar symptoms started happening, and there’s no guarantee that I would have done any better. I’d like to think I would, but there’s no telling, really.

No, what I feared was having to go off my medication while pregnant (and breastfeeding, should it come to that). I was terrified of being unmedicated and I knew that psychotropic drugs were not good for pregnant women or their developing babies. Once I had discovered the benefits of Prozac and other mood-regulating meds, I knew I never wanted to be without them again. I never wanted to again fall into the pit that I had clawed my way out of. (In truth, that pit was waiting for me anyway, when I experienced a major depressive episode many years later.)

Postpartum depression scared me too. I had heard the horror stories of women killing their children and/or themselves while suffering from the illness. I knew how out of control I could get with just plain ol’ garden-variety depression and anxiety. Adding postpartum hormones to the mix could be a really bad thing.

But the main reason that I decided my bipolar disorder made it unwise to have a child was that it would be unfair to the child. How to explain to a toddler that mama couldn’t get out of bed today or that she burst into tears for no apparent reason? How to explain weeks or months like that? How to deal with a child jazzed up on mama’s sudden hypomanic jag, who would then be let down when she crashed? How to soothe a child’s anxieties when mine were making me jump out of my skin? How to take care of a child’s essential needs, when I suck at taking care of my own?

Is that selfish? I know there are people who would say it is. That when the time came, I would suck it up and do the best I could. And I might. But would that “best I could” be good enough? I’ve heard it phrased that I was too involved with giving birth to myself – a relatively stable, reasonably happy, mostly functioning self – to give birth to someone else. And I think there’s some truth in that. It’s been a struggle, filled with despair, misery, hard work, setbacks, immobilization, dangerous thoughts, and living too much in my own head. To do the work of bringing myself to some baseline of functioning while trying to nurture and bring up another person daunts me.

I do understand that there are women with bipolar disorder and even postpartum depression who have children and that those children can be happy, healthy, and as well-adjusted as any modern child ever is. I don’t know how they do it, though. I was fortunate that I had a choice of whether or not to have children. I know that not all women do, and that many are delighted with their choice – whichever way they decide. I know that there are those who desperately want children and are unable to have them. I was fortunate that my husband didn’t push the issue, despite the fact that he would have welcomed a child.

I also had irrational thoughts about that potential child. I imagined that if the child were a boy (which run in my husband’s family), Dan (whose inner child is, shall we say, close to the surface) and the little boy would be natural allies and I the odd one out. He would be the fun dad and I the not-fun mama. And while that’s somewhat irrational, it also might be partly true. It took a long time for me to learn how to relax and have fun and share it with another person.

The one time I was open to having a child was when my father was dying a slow death. I thought that if he was going to see his grandchild, I’d better produce one promptly. Fortunately, it didn’t happen. I later realized that that was a really poor reason to bring a new life into the world.

What I’m saying is that the decision is not – was not – an easy one. Having a mental disorder makes it even more difficult.

What I Learned About Bipolar in College

When My Carer Needs Care

Comments on: "My Hypothetical Baby" (5)

The Lens and the Brush

To Do Or Not To Do