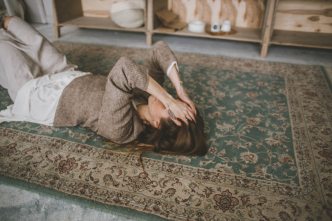 “I hope I don’t wake up tomorrow morning.”

That is the classic thought of someone suffering from passive suicidal ideation. It’s not really a desire to die by suicide. It’s just a way of expressing how much it hurts to be you.

It’s not active suicidal ideation, the kind where you make an actual plan to kill yourself, even if you never put it into practice. It’s passive, meaning that you’d like to be dead but don’t intend on doing anything about it. It’s like asking the universe to take over and do it for you.

I’ve certainly had passive suicidal thoughts. Once I was very stressed and depressed while coming home from a business conference. I clearly remember thinking, “Maybe the plane will go down and keep me from having to deal with all this.” I certainly had no plan to rush the cockpit with a box cutter or anything like that. I just wanted my pain to be over. I wanted the choice taken out of my hands.

Another time I was at a business meeting in a swanky hotel that had rooms surrounding the lobby on numerous floors. I remember being on the 16th floor, looking down at the atrium beneath with what felt like idle curiosity. Would it annoy the hotel more, I wondered, if I landed on the carpeted area, necessitating a thorough cleaning or total replacement? Or would they be more upset if I landed on the marble floor portion of the lobby, making a bigger mess and potentially chipping the surface? (And was it just a coincidence that business meetings made me contemplate my mortality or did they just come packed with a lot of stressful triggers?)

At neither time was I actively suicidal. I’ve been there once too, and this was completely different. When I was suicidal, I had actual plans and plenty of means to carry out any one of them. I’m not going to discuss what those plans were. (The difficulty of choosing among them may have been what kept me from actually doing it. By then my depression had lifted just enough for me to get help.)

It was easy enough later to make jokes about the passively suicidal occasions and most people took them as exactly that – jokes. It was even plausible that they were jokes. I used to talk about jumping out a window, adding that it wouldn’t work because I lived in a basement. It was only much later that I thought about it and realized that I needed help even on those occasions. After all, isn’t pain the source of much humor and the downfall of many comedians?

Passive suicidal ideation is asking yourself “what if?” What if my troubles were over? What if my pain was gone? What if all I had to do to accomplish this was to let that bus hit me instead of stepping out of the way?

The important thing to remember is that someone passively suicidal is in great psychological pain and wants not to feel that way anymore. In that respect, it’s similar to cutting or other self-harm. And like those acts, it doesn’t end the pain at all. It may be a temporary escape valve, but it’s not a solution.

The One Pill I’m Embarrassed About Taking

Ridding Your Life of Toxic People to Save Your Mental Health

What Does Friday Even Mean?

Things I Want to See in My Lifetime