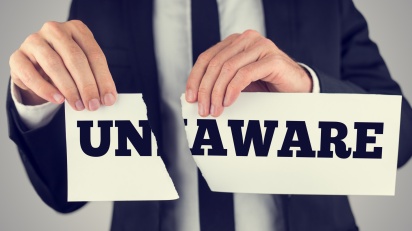 “Depression isn’t real. You feel sad, you move on. You will always be depressed if your life is depressing. Change it.”

Now, before you jump all over me, let me say that I never said that. It’s a tweet from Andrew Tate, kickboxing champion and former star of “Big Brother UK.” It caused quite a stir in the Twitterverse and was immediately challenged by, among others, J.K. Rowling and Patton Oswalt.

Obviously, there are a few things wrong with Tate’s opinions. First, the notion that depression isn’t real. To quote Hemingway, “Isn’t it pretty to think so?”

The millions of us with major depressive disorder and bipolar depression would love it if our disorder weren’t real; if we could just move on. If we could only change our lives. Kick depression out of our heads, as we should be able to, according to the kickboxer.

And Tate threw more fuel on the fire. He tweeted “MY DEPRESSION INBOX. Is hilarious. Full of crybabys. . . .”

Admittedly, many depressed people cry. But that doesn’t make us crybabies. Babies stop crying when their needs are met. People in the throes of depression don’t really know if their need for it to stop – their need for, if not happiness, at least not-despair – ever will.

When I first became clinically depressed I was a child and knew nothing about clinical depression. But I knew I was profoundly depressed. And I knew that if I waited long enough, that depression would lift. Being undiagnosed and unmedicated, I had no idea when I would come out of depression. All I could do was wait for it to happen.

Now older and wiser (and diagnosed and medicated), I know some things I can do to shorten that time until the depression lifts. I can practice self-care. I can call my therapist. I can turn to my husband. Now I know – really know and understand – that my depression isn’t forever, even if my disorder is.

And I know that, if I have to, I can push through depression instead of waiting for it to ease up on its own. Meeting my self-imposed blogging deadlines is one way I do that. Paying the mortgage and power bill is another. In some way those are both life-affirming activities, or at least statements that I am still connected to the world – however fragilely – and that I want and need to come out of the depression and get on with my real life.

It’s ridiculous to say “move on” or “change it.” Depression comes and goes when it wills. All we can do is endure it and keep pushing back until it gives the tiniest toehold. Then take that tiny purchase and push some more. It’s the hardest thing in the world when depression has sapped your energy, but believe me, there is more inside you somewhere. It may just take a long while to find it and to recognize it. We can no more change our depression than we can our souls. We can push back against it.

So screw you, Andrew Tate.

And screw you, depression.

Comments on: "Andrew Tate Doesn’t Get to Define Depression" (5)

A Room of My Own