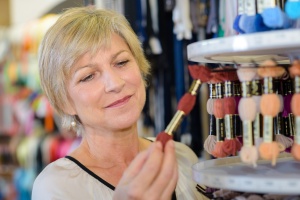 First, let me say that aging sucks. Except that the alternative sucks more. The problem is, I can’t always tell whether anything that happens to me is due to my bipolar disorder or due to aging. I fear that, since my bipolar is fairly well in check at the moment, what are left of my problems may be due to something else.

My hands shake, for example. This has been true for years, though. The neurologist called it “essential tremor,” which I think means it just happens and they don’t know why. But some medications have made the tremor worse, and one of the medications I’m taking now could be increasing the shaking. And the shaking gets worse when I have anxiety. So I think we can chalk that one up to bipolar disorder, mostly.

I forget words. Sometimes, when I’m talking, I forget the word that comes next and have to pause or talk around it until it comes back to me. Sometimes my husband fills in the blank, which is helpful, but really annoying. For a writer, losing words is scary, but the memory difficulties seem to happen more when I talk than when I write.

I know I’ve had memory lapses before that can be attributed to my medication, and those memories are gone forever. I’ve written about that phenomenon: http://wp.me/p4e9Hv-6k. But these seem to be single words that escape me, and that I can usually get back within a few seconds. It doesn’t feel like anything I’ve had associated with bipolar, so I suppose this one is aging. If it’s the onset of Alzheimer’s, I’m going to be so pissed.

I isolate. This I’m pretty sure is bipolar in nature, since I’ve been doing it for years, especially when I’m depressed. I’m also reasonably sure that I am getting less isolated as my bipolar disorder has eased. I still don’t get out much, though I did go to a fabulous (and large) party last Sunday. But I am active on Facebook and Messenger, and I write these blogs, and I talk on the phone.

On the other hand, I seldom leave the house, and that I think is an effect of aging. I have mobility and balance problems because of a bad back and some nerve damage in one foot. But bipolar is involved, since weight gain from medications also affects my mobility, and an aversion to crowds and noise is likely associated with my anxiety.

Side effects of bipolar disorder and bipolar medications are to be expected. So, for that matter, are side effects of aging. Teasing out which is which may seem futile, and perhaps it is. I just want to know which I have some degree of control over and whether some, especially the cognitive symptoms, are likely to fade, stay the same, or get worse.

Comments on: "Bipolar and Growing Older" (9)