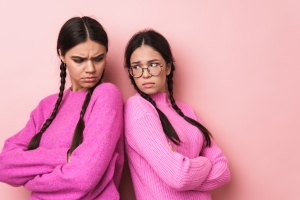 By Drobot Dean from Adobestock.com

I have to keep a close watch on what I say in public or post online. I am afraid of offending people. Many times I have lost friends because of things I’ve said or done.

I was not very well socialized as a child. The house I grew up in was very insular. My parents made few attempts to mix and mingle with neighbors or other school parents, so I didn’t see much of that as a young person and learn the unwritten rules. (My father did mix and mingle with the local gun club, but there were not many persons of my age and gender there.) I never went to preschool because I had a sister, we were very close in age, and my mother figured we could simply play with each other. (This was in the days before formal “playdates.”)

As I got older and my bipolar disorder began to manifest, I was even more out of sync with what the other kids were doing and saying. My mood swings left me laughing uproariously at things no one else thought were funny, or being gloomy and surly as a self-isolating hermit. I never learned the rules at school, either, of how to negotiate the complex patterns of behavior required as a student. I didn’t even know enough not to show off my intelligence, which didn’t win me many friends.

As I grew older, I got in the habit of tapping my face – symbolic slaps – whenever I said something that I realized I ought not to have said. (This was both puzzling and annoying to my companions.) It was a reminder to me to keep more of what I thought under wraps.

Of course, at the time I didn’t know that I was bipolar. I thought I was just weird. It never occurred to me that my brain was different, that I reacted in peculiar ways because of something I could not, at the time, control. I tried to be quiet and unobtrusive, but the manic humor kept leaking out, usually when no one else thought whatever it was was funny. I garnered a reputation as an oddball, even among the odd people who befriended me.

Later on, in the world of work, I was even more out of my depth. I still didn’t know how to socialize. I couldn’t manage “team-eating,” the mysterious rituals of the groups of workers who lunched together. I consciously practiced my socializing with the few people who would put up with me. I observed social interactions, but I never really internalized them.

All of this made me afraid to offend people, so I began to shut down. I kept my jokes to a minimum. I didn’t even try to join the ladies who lunch. My social life was practically nonexistent.

Then came the internet and, especially, Facebook. Every time I wanted to post something, I had to run the content through the internal filters I’d built. Was it too racy? Too political? Too self-revealing? Too something? Would it offend someone and lose me more friends?

I developed techniques to soften my replies to other people’s posts. I’d agree with any part of a post I could and then add my real opinion, very softly. (I agree with you that there’s a lot wrong with our economic system, but it’s very complex and I think more regulations will be needed to improve it. I agree that most police are protective and well-regulated, but I think training in dealing with mentally ill persons would benefit everyone.) I became wishy-washy.

How does this reflect my bipolar disorder? Losing friends was one of the big traumas I went through as a child and I never wanted it to happen again. My first physical trauma was at the hands of other children, who threw rocks at me. My first bipolar “break” was a result of being humiliated by my best friend. (“Kids can be mean,” my parents said, but I knew deep inside it was all my fault.) Losing friends became one of my major triggers, something I would try anything to avoid. I just wasn’t very good at avoiding it.

Gradually, I am getting better at socializing and at speaking up without the constant fear that my words and actions will drive away people who care about me. I still try not to be confrontational, but if a meme expresses something I care deeply about, well, I will repost it. I still try not to insult the persons closest to me, but sometimes it takes me a while to figure out how to say something with just the right words in just the right tone of voice.

Bipolar? I think my glitchy brain got sidetracked by the illness when I should have been learning the ways most people behave. Now that my illness is mostly under control, I am trying to make up for lost time.