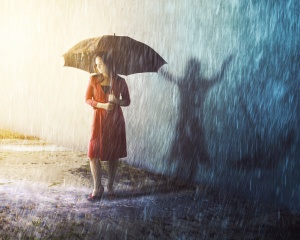 Sometimes it seems like my life has been one long string of misery, despair, and disappointment. But that’s not true, really. Though I was likely bipolar even as a child and have suffered from depression and anxiety ever since, I still have some good memories of even the most difficult times.

Take childhood, for example. Yes, I was moody and difficult, and I missed out on a lot of opportunities, but good things still happened to me. My parents didn’t understand my condition, but they provided a stable, loving home. We had relatives in the country that we visited often, and I had the opportunity to fish, ride horses, and play in haylofts. My parents encouraged my love of reading and regularly took me to the library to get a “fix.”

Yes, I cried at songs on the radio that weren’t even sad. Yes, I went into complete withdrawal after a humiliating incident at a birthday party. And yes, I walked alone in the rain so no one would see me cry. But I also have memories of camping and hiking and baking cookies, going to concerts and discovering the Lord of the Rings.

When I went to college, my condition was even worse. My moods were even more unstable and I began to self-harm. I went to the college infirmary when I expressed suicidal thoughts and stayed there overnight. Twice. (The only times I’ve been hospitalized, sort of.) I sat awake in the hallway at night, staring at a poster on the wall. I took a year off to try to decide what direction my life would take and returned with nothing changed.

On the other hand, I made some really good friends who stood by me. I had some amazing professors (including Carl Sagan) and developed my writing skills. I finally had my first date, my first kiss, and a few other firsts.

During that time, I also entered into a disastrous relationship that lasted just over a year and did major damage to my self-esteem and my moods. It shredded my ability to cope and led to more self-harm and self-medicating.

But again, there were bright spots. I made some more friends, whom I cherish to this day. I met my husband. I heard some wonderful live music and met many of the performers. I made it through the four years and won my diploma (and it did feel like a real win).

While I was healing from the traumas I’d already experienced, I had a lot of problems with depression and anxiety (which were not yet diagnosed as bipolar 2). But I also held down responsible nine-to-five jobs and began to have my writing published in magazines. I traveled domestically and abroad, both alone and with others.

For a while, it seemed like my disorder was on hold. I thought I had escaped the traumas of the past and made a new life for myself, one that included a few close friends, a lasting love, some new experiences, hobbies, beloved pets, and more music, both live and recorded.

Then I experienced a major crash, one that left me unable to work, to write, or to do much of anything for over a year and a half. It was unrelenting. I enjoyed nothing. I had distressing physical symptoms that left me incapacitated for days. I wouldn’t have gotten through it all without my husband.

Then came my proper diagnosis and medication. Things didn’t change for the better instantly. I still suffered profoundly while my doctor and I tried med after med, seemingly to no avail. At last, we came upon a cocktail of drugs that made it possible for me to live and work again, to enjoy day trips and weekend travel, to write and love and live. Since that time, I have learned to live with the limitations I still have and to treasure the good things that do happen.

My bipolar disorder has been like that, with a series of relapses and relatively stable periods strewn among the bad times. And, though at times my disorder has felt all-pervasive and unrelenting, if I think about it honestly, even the bad times were dotted with little islands of good things.

Bipolar may have been a large part of my life, but it hasn’t been my whole life.

Beautiful at the Broken Places

What Should Medical Students Learn About Mental Illness?