I Am Still Bipolar* 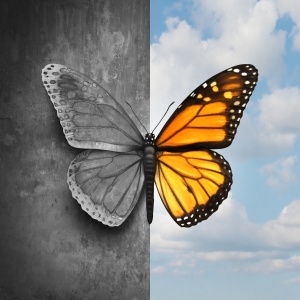 Last week I wrote a post that said I had stopped psychotherapy for bipolar disorder. But I am still bipolar. (And for those of you who object to that phrasing, see below.*)

Because my bipolar disorder is under some degree of control, it would be tempting to say that I no longer have it. That I am well, cured, normal, healed. That I am not bipolar.

But I still am.

I can work (at home) and earn a living, but I cannot go out and work in an office 40 hours a week. I can go out and run an errand occasionally, but one or two is about my limit. I spend most days on a fairly even keel, but I still cry for no reason sometimes or get myself in over my head when I think I can do more than I really can. I can travel 50 miles from home by myself, but I can no longer travel alone overseas as I once could.

I am still bipolar.

My symptoms will come and go. I will have good days and bad days. But I can never say, “I am cured.” Honestly, I don’t think I’ll even get to the point where I can say, “I am in remission.”

I am still bipolar.

I still have to watch for triggers and symptoms and pay attention to self-care and have someone to help me when I can’t. I still have to take my meds and I most likely will for the rest of my life. I still need to see my psychiatrist and have a psychotherapist’s number that I can call in case of emergency.

And that’s okay, sort of. I have learned to live with it, deal with it, cope with it, sometimes even ignore it.

But I am still bipolar.

I understand the reasons that many people will not say “I am bipolar.” “You wouldn’t say ‘I am cancer,’ would you? I am not my disease,” they explain.

And that is true. You would not say “I am cancer” and you are not your disease.

But “I am bipolar” is still a perfectly accurate thing to say. Here’s why.

The thing is, “bipolar” is an adjective (as in “bipolar symptoms”) as well as a noun.

There are plenty of words that work the same way. “Fat” is both a noun and an adjective. You can say “I am fat,” but usually don’t say “I have fat,” unless you specify, “I have fat around my waist.” That’s why “I have bipolar” sounds so weird to me. I’m used to “bipolar” being an adjective and perfectly acceptable in the construction “I am ______.”

So, I am not my disease. But I am still bipolar.

Nonetheless, I won’t try to make anyone else follow my rules. If you don’t want to say, “I am bipolar,” then don’t. I won’t object. But if I say I am, understand that I have reasons. Pedantic, academic reasons, but that’s where I come from.

Why I Stopped Therapy

I Sort of Understand

We All Know What Labor Day’s About. Or Do We?