In the past week I have had to deal with:

Out of all of those, which do you think came nearest to breaking my brain, causing me to catastrophize and dissolve into prolonged fits of weeping? 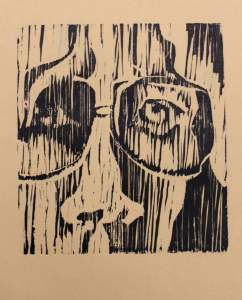 If you guessed the missing cat, you’re right. One day she trotted out the deck door while I was feeding the dog, a thing she had never done before. I scooped her up and put her back inside, and resolved to close the door further in the future. Louise is 20 and rather thin, so it’s easy to misjudge what she can squeeze through.

When my husband got back (safely), he took over feeding the dog. Then the next day, Louise didn’t show up for her morning breakfast. Or lunch. Or dinner. She usually has a hearty appetite and meows quite loudly if a meal is late.

Naturally, I thought she had gotten outside again and was lost. We searched through the house, calling her name, and went around outside the house doing likewise. My husband thought she might be feeling poorly and holed up somewhere, most likely in the basement, which is also the garage and not easy to search because of all the clutter.

I thought she must have gotten out and succumbed to some fate out in the woods – a dog or other animal, the rain, hunger, illness and debilitation.

I was convinced she was gone for good. And I had thought I still had more time with her, despite her advanced age (20+). I was inconsolable. My precious cat, gone. No knowing what had happened to her. No chance to say goodbye. No way to comfort her in her last hours on earth.

Dan told me that everything would be all right, but I didn’t believe him.

Then, the next day, she showed up at mealtime, bellowing that she wanted food NOW! Dan had been right. She had hidden somewhere in the house and came out when she was ready to.  I had my darling Louise back, for however long she still has.

Then, after the long holiday weekend, the check came and I paid the bills and set up the new insurance and got my meds and went out to lunch with Dan and everything was all right.

Just a little while ago, I wrote about how having a cat saved my sanity (http://wp.me/p4e9Hv-jS) and how they can be good for people with mental disorders. I even said that losing a pet could teach us something about the grieving process.

But when my own cat disappeared, all that philosophizing went out the window (or the deck door). Louise was gone and I was bereft. Nothing anyone could say could make it better. And the situation was complicated by the fact that both one of our other cats and our dog are also ancient. I know I will go through their loss, and likely soon.

Will I hold up any better?

I really don’t know. The other cat and the dog are my husband’s, bonded to him the way Louise is bonded to me. Likely his grief will be greater than mine. Or maybe when they pass they will remind me of how close I came to losing Louise. Maybe I’ll be able to support him in his loss, or maybe my brain will break again. Maybe it will happen when I am more stable, with fewer disasters and near-disasters clustering around my head.

But I know I won’t give them up. The loneliness of not having them is even worse than the pain of their going.

ETA: Dan’s ancient cat Garcia passed away peacefully at home this morning (Saturday). We were both with him at the end.

Looking Back – But How Far?

Comments on: "Struggles and Tears" (3)