I Got Away Successfully!

Last week I mentioned that my husband and I were planning a day trip to Cuyahoga National Park to see Brandywine Falls. This was based on a sudden, nearly inexplicable urge to get out of the house, get some fresh air, and see nature, despite my aversion to exercise. Maybe I was a little manicky. Who knows? 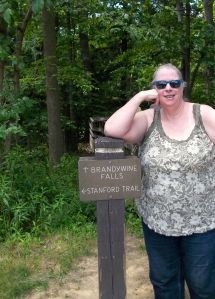 I’m happy to report that the trip was a success, as you can see from these pictures. The drive up was long and hot (so was the drive back), but that gave us plenty of time for conversation. We got lost a couple of times in the park area (it’s a big, oddly shaped park), but with a little help we found the right parking lot and even grabbed a space near the trailhead. As advertised, there was a boardwalk that led right to the falls, or at least to an overlook with a great view.

There were also 69 steps leading down to the falls, or, more to the point, 69 steps leading back up to the boardwalk and the overlook. I declined to attempt the stairs, but my husband did, and got some pretty good pictures.

Since it was Father’s Day, there were a number of families there, but not so many that the trail seemed like a line for the rides at DisneyWorld. The weather was ungodly hot – in the 90s as we were driving home – but the boardwalk was shady and there was a bit of a breeze. 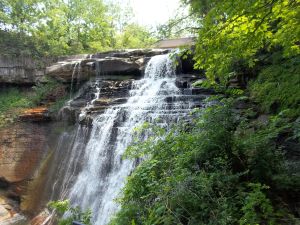 So, what did I learn from this little adventure? First, that travel, at least on a small scale, is possible for me. I liked it so well that I am looking forward to taking another such trip, though most likely when the weather is cooler.

I drove the whole way up and back and was not bothered by my fears of drivers in the other lanes or railings and concrete dividers being too close to our car. (This is a thing that used to happen, even when I was a passenger. Driving was out of the question back then.)

Second, that I could make this trip with only minimal panic. I did have a moment on the way home. We stopped to eat, and as I rummaged in my bag for my regular glasses, I couldn’t find them. I thought they were pretty likely to be in the car, though I had visions of the case lying on one of the benches along the boardwalk. I was even trying to figure out whom to call or write that might be in charge of lost and found.

However, I managed to suppress the feelings, read the menu with my sunglasses on (that actually may have been the hardest part), resist the urge to ask Dan to go out to the car and check, and get through the meal.

The glasses case proved to be in the car and I managed to avoid either panic or mini-meltdown. I call that success. I finished driving home, we fed the animals, and then collapsed. It was exhausting and exhilarating and adventurous and restorative, and most of all, proof that I could travel again, at least for a medium-short jaunt. Travel was one of my greatest joys and one of the things I’ve missed most since the bipolar stole so many parts of my life. I am delighted to be able to say that I am beginning to reclaim it.

All photos by Dan Reily

Out of the House – At Last

Coats of Many Colors